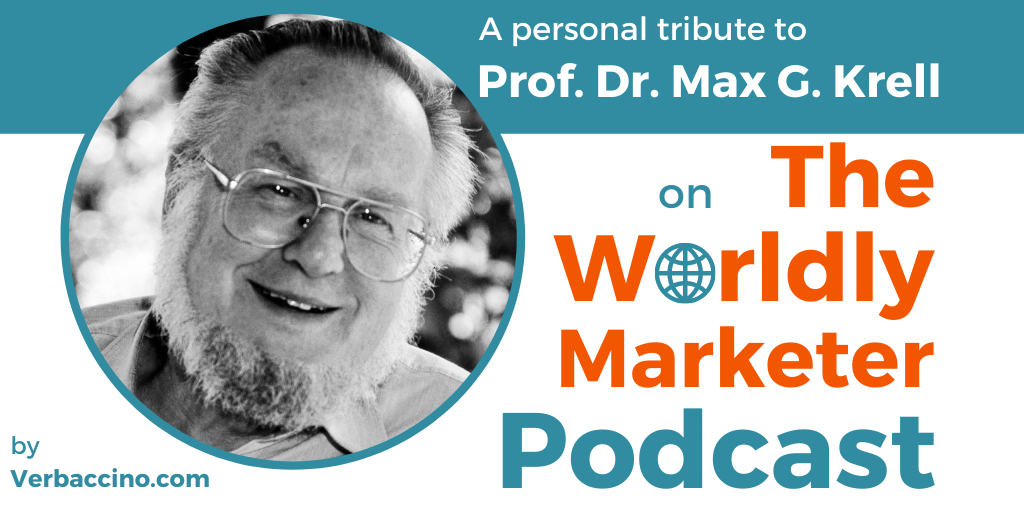 This week, instead of bringing you a podcast interview, I’d like to share something a bit more personal. I’d like tell you about my father, Prof. Dr. Max G. Krell. In so many ways, he’s the reason I’m the person I am today.

My father was a nuclear physicist. He was born in 1935 in Lower Silesia, a region that was part of Germany before the Second World War and is now part of Poland. He studied Physics at the university of Erlangen, in Bavaria, which is where he met my mother. As newlyweds, they moved to Karlsruhe, another German university town, so that my father could pursue his doctorate. They then relocated to Geneva, where my father worked at the European Organization for Nuclear Research (CERN) for several years.

Eventually, my father accepted a tenure-track position in the department of Physics at the Université de Sherbrooke in Quebec. Leaving behind all their family and friends, my parents immigrated to Canada. My mother was almost eight months pregnant at the time, and I was born about a month after they had settled into their small apartment near the university campus.

As a little girl, I remember how much I loved hanging out in my dad’s office after school. He had a huge chalkboard mounted to the wall, and I would happily pass the time drawing pictures and practicing my cursive while he finished up his paperwork for the day. Occasionally, he’d take me to the university cafeteria for a sweet treat. We’d walk across the campus together, and I was so excited to be there with him, surrounded by impressive-looking buildings and clever-sounding people. I think that’s why I’ve always loved university campuses; they just feel inherently familiar and comforting to me.

My father had a three-decades long career as a science professor in Sherbrooke. He finally retired in 1999, and happily devoted himself to his 100-acre hobby farm. He had bought the property, a ten-minute drive from the university, when I was two years old. It was a perfectly square, partially forested piece of land, with an old “saltbox” style farmhouse, a barn, and a couple of ponds. This was the backdrop of my childhood. To my father, that farm was his very own piece of Paradise, something he could have never afforded if he had stayed in Germany.

He often told me about his own childhood, vividly remembering the years around World War II. At the end of the war, he and his family had had to flee their village and head west to safety, with basically just the clothes on their backs and whatever they could carry on foot. The years right after the war, his formative years, were especially difficult. His family had to start all over in a new town, mourning loved ones lost in the war, rebuilding their lives from scratch, and food was in short supply. I suppose that’s why my father was obsessed with the idea of having his own land and being as food self-sufficient as possible. My mother, whose family had also been forced to flee westward at the end of the war, was on the same page.

Thinking back now, I realize what a wonderfully idyllic childhood I had, growing up in the beautiful countryside of the Eastern Townships – though I often dreamed of city life, especially as a teenager. We had a huge vegetable garden, fruit trees, berry shrubs, beehives, a small herd of sheep, rabbits, ducks, geese, and more. I was immersed in the natural world, seeing things grow around me, planting things, harvesting things, witnessing the cycle of life, and knowing exactly where most of my food came from.

For my father, the proximity to nature, combined with his training as a scientist, also led to environmental activism. In my teens, I remember several citizen-led, pro-environmental initiatives that my father helped launch and organize, which were driven by the prospect of local authorities making potentially disastrous decisions.

In one case, he and a coalition of other rural residents prevented the greenlighting of a new garbage-dump project at an abandoned copper mine just uphill from our farm. Had that project gone ahead as planned, it would have contaminated the drinking water for the entire surrounding area.

In another case, he and his fellow Citizens for Nuclear Responsibility managed to quash Atomic Energy of Canada Ltd (AECL)’s attempted “gift” of a Slowpoke nuclear reactor to our local university hospital. It was in large part my father’s credentials as a nuclear physicist, combined his expert assessment and outspoken criticism of the reactor’s safety features, that helped tip the scales of public opinion, forcing AECL to abandon the project.

All through my youth, I witnessed my father fight stubbornly, unflinchingly for what he believed was right, even when it meant opposing the powers-that-be. He taught me some very important lessons about stepping up when it matters and fighting for the greater good. He shaped the core values that I carry with me as an adult: a belief in science, in justice, in personal integrity, and in social responsibility.

On April 16th, 2002, exactly three years into his retirement, my father died unexpectedly of a massive stroke.

I wish he was still with us.

This Saturday, the day before Easter Sunday, marks the 20th anniversary of my father’s passing. On the one hand, I can’t believe it’s already been 20 years. On the other hand, so much has happened in those years – many things that would absolutely amaze and thrill him, and other things that would completely outrage and dismay him. I’m pretty sure that if he were still alive, at the age of 87, he’d be as involved as ever in his local community of environmental activists.

My father was a man of strong principles, deep moral convictions, and a level of personal integrity that seems all too rare these days. He believed in fairness, honesty, and accountability. And he wasn’t afraid to say unpopular things if he felt that truth and justice were at stake.

I’m incredibly proud to be his daughter. In so many ways, his legacy is what drives me now.

So this Easter long weekend, I will celebrate my father’s life, and I will remember all the things that made him a such wonderful dad and a truly great human being.

Whether you’re celebrating Easter, Passover, Ramadan, or Songkran, I hope that you’re able to spend it with family or friends, sharing memories of loved ones who have passed, and cherishing your time together.